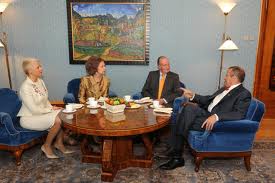 The King and Queen of Spain will be married 50 years in May 2012. There are few catholic royals who won't stay together for life, even in hard times. (Exception: Prince Hugo Carlos and Princess Irene, see that post). Time is hard for the Spanish royal couple. Their charts show it, the wedding chart shows it and their natal charts also tell us about the symbol of 'decorum' and distance: Saturn.

WEDDING
Above is Queen Sofia's chart, with transits and progressions for the wedding day. In the early years of the marriage of Queen Sofia of Spain and King Juan Carlos her progressed Sun was conjunct Venus and sextile Mars. Venus and Mars are the planets of passion. Venus makes you happy. When she married, Progressed Venus was opposition Ceres (love and dynasty/motherhood) with transit Jupiter trine her Sun (social success).

Do their charts match? A tiny bit, I’d say. Of course charts aren’t telling us all, but they mirror certain tendencies that I like to show you.

MATCH AND SYNASTRY
Sun signs
Their sun signs seem to be compatible (she is a Scorpio and he is a Capricorn). But… their birthdays are a challenge: their suns are semisesquisquare (67.5d) apart. (See if your birthdays match here).  That doesn’t necessarily mean that you can’t live together, but it will be more difficult to join the ways of life.
Moon signs
To compensate, their moons are in Aquarius. Their backgrounds, needs and habits are in line. There is at least friendship and attraction.
Venus signs and aspects
Venus in Sagittarius is no match for Venus in Capricorn, so that their preferences will differ. It makes it harder to enjoy things together. Her Sun/Moon is conjunct his Venus (ruler 1). There is a great sense of ‘ to belong’ together.
Mars signs
The challenging aspect between their Mars:  157.5 d (sesquisquare + half semi square) is for competition and anger after ‘fire’ from the start.
Synastry and Sun Saturn
There is a difficult synastry aspect and that is: her Saturn square his Sun. Such an aspect refers to barriers between them. This Sun-Saturn conflict becomes an issue now that he has Progressed Sun conjunct Saturn and now that transit Saturn is on the cusp of her 7th house (of marriage).

Saturn is hitting hard in the charts of los Reinos: the King and Queen of Spain, today, just before the 50th anniversary of their marriage. He broke a leg and he had to say sorry in public. She spent 15 minutes with him after three days. That is Saturn. Saturn is the symbol of criticism and separation in a relationship. Mistakes and faults are being highlighted when it is time for Saturn. Often that is just too much for the marriage (see examples*), and divorce follows, but divorce is rare in a royal catholic family. What is left is perhaps cool distance for a while. Or business as usual?
Even the chart positions of the wedding (on May 14, 1962) has difficulties: progressed Sun trine Neptune might make it a 'fairy tale' but there is an
Well, they managed to stay together for almost 50 years, so I guess that this marriage survives in spite of these inconjunctions of Saturn and that they and their family will celebrate the 5 decades anyway. In spite of the mistress (Corrina zu Sayn-Wittgenstein Frankfurt-am-Main, supposedly born January 29, 1965 with her Venus semi square the king's Sun/Moon, her Neptune opposition his Ascendant - romance! - and Sun square the Sun of Sofia with Saturn on Sofia's Moon).


On Astropost there is a post with more about the present transits and progressions with Saturn in the charts of the king and queen of Spain for April 2012. I will send the link later.


*)Think of my post 'Saturn and saying goodbye'. I mentioned: