This is the chart of Letizia, Crown Princess of Spain. The ‘ transits’ are the natal positions of her husband, Felipe, with exception of the Moon and his Ascendant and Midheaven (he has the Moon in the 20th degree of Aquarius, square the Ascendant in 20th degree of Taurus and Midheaven in the last degree of Capricorn). What occurs to me first is that Letizia has the Sun square Saturn, a difficult aspect when it comes to restrictions and status, just like Dutch Crown Princess Maxima and the Belgian Crown Princess. Letizia has 2 of the 4 indications for divorce in a woman's chart (Sun conjunct Mars and Mars exactly square Saturn) and Uranus is in her 7th house. First I thoughht that this was a risk for this marriage, but (see comments!): she was married before! Felipe doesn’t have the indications for divorce in a man’s chart. He has Neptune in the 7th house. 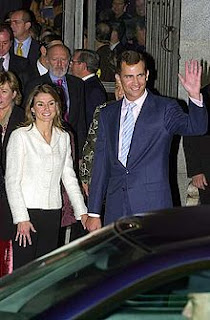 How does the next Spanish royal couple (Felipe and Letizia) match?

The complete picture is that they don’t match easy but they are strongly connected to each other. In a way there is a similarity with the synastry of the royal couple (the parents of the prince). See that post. Continue for more...

Well, the relationships between the charts is strong. It means that their lives are strongly connected, too and that they will never take each other for granted. There are difficulties to overcome and they don't match much. But, they love each other and that is often a great help!
Gepost door Astromarkt op 09:19