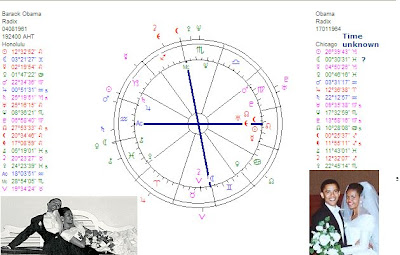 The most famous couple in the world of politics are the Obama's. Why are they together? Michelle Obama is a Sun Capricorn and Barack Obama is a Sun Leo. Their Suns are a quindecile apart for a strong focus on each other. Their sunsigns don't match, however. Capricorn and Leo Suns are both the kind of persons who want to be in charge.

Barack Obama is a Leo and in his progressed chart Saturn (ruler of Capricorn) is on top right now. This shows leadership and responsibilities.
Michelle's Sun in Capricorn (the sign of responsibilities, government and ambition) does not make Ptolemaic aspects: she is drawing attention and wants to be in the centre of it at any possible level.
So both have the qualities of a leader. Who's in charge:)? She is very encouraging and supporting him (Jupiter trine his Sun; their successes connect them) and he respects her (Saturn conjunct her Sun; responsibilities and ambitions connect them).

OBSERVATIONS
1. Natal charts and divorce
There are no aspects that indicate divorce in their charts.

3. Shared aspects
There are no shared aspects (but see the next post about Michelle's guess chart).

Barack and Michelle Obama are both strong personalities and Michelle is a great support for Barack Obama. She has faith in him (her Jupiter and Neptune are involved). But...there is also the Mars-Saturn inconjunction. It is not a pleasant aspect. It is one of the indications in a woman's chart for an untimely end of a relationship with a man (perhaps through divorce). Cafe Astrology is not very positive about this interaspect, too, see: http://www.cafeastrology.com/synastry/mars_saturn_aspects.html. (It cannot be perfect, can it?)

Based on the synastry between the charts of the Obama's I made a guess chart for Michelle in the next post.