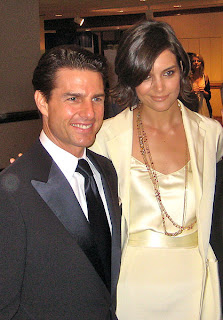 This week it was hot news that Katie Holmes left Tom Cruise. It is his third divorce. It is her first time.  I first planned to tell you all about it, but after writing it down, I decided to keep most of it to myself, to stick to the pictures and just tell you this:
a. They never matched at all. Their signs don't match. And his Sun is quindecile her Sun: that is an obsessive aspect and a hard one. Their charts weren't made for each other.
b. They both have a Mars-Uranus aspect. In short: hurry hurry hurry and boom! Her Venus-Uranus aspect warns for marrying too quickly with the wrong person.
c. When she married him she had Pluto on her Sun. His Pluto is in hard aspect with her Sun/Moon midpoint. This usually complicates a relationship.

For the purpose of study we have the Astrodienst AA-rated chart of Katie Holmes and the day of birth of Tom Cruise. We also know when they got married. Here are the charts.

A chart of Katie Holmes. The ' transits ' are the positions of the day of birth of Tom Cruise.

Above is the chart, progressed chart and transits of Katie Holmes on her wedding day.  There are a lot of transits and progressions. Like this one: the Progressed Ascendant is conjunct Saturn! When Orson Welles married Rita Hayworth, transit Saturn was on his Ascendant. The marriage didn't last. (see: http://astrology-love-romance.blogspot.nl/2011/09/famous-couple-orson-welles-and-rita.html)

There was a rumor about Katie wanting to move out of the family house, in 2008 (see the post: http://astropost.blogspot.nl/2008/07/house-and-chart-of-tom-cruise-and-katie.html )

And now she left.

LESSON
About aspects:
Inconjunctions between charts make it hard to maintain a balance between the two of you. Squares ad opposition at first seem to attract the 'opposite' but don't make it as easy as trines and sextiles to stick together. Conjunctions join you, but sometimes they join what you don't want (for example your sunny Sun and his Pluto). Quindeciles often cause obsession. Quintiles offer creative solutions in case of differences and noviles help you to see the good things in the partner.
About planets:
Pholus creates a point of no return. Uranus comes by surprise. And Saturn as a guest on your wedding day is usually not invited!

See the label for more examples of divorce.

PS
The astrological pattern of professional artistic talent in the chart of Katie Holmes is in the Moon square Venus and trine Neptune, with Midheaven square Moon, opposition venus and biquintile Neptune. The 'calling' Sun with the Moon and Ascendant in Leo will always make Katie Holmes shine and look brilliant wherever she is,with or without Tom Cruise.