The Sun/Moon midpoint is an important midpoint. Not just in your natal chart, where the Sun/Moon midpoint is highlighting the most important ability or issue in our life. It is also important in your progressed chart. Sun/Moon is very important for a relationship. Any planet of a partner that is in aspect with the midpoint Sun/Moon is creating a strong sense of 'to belong to a person'. A famous example is Queen Victoria. Her Sun/Moon in Gemini is exactly square the Sun of her husband Albert. They had 9 children together and she never stopped mourning his early death. 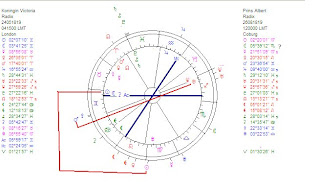 I have a Sun/Moon midpoint square my husband's Sun, too and I know of others who do. More examples:

Her Saturn square his Sun/Moon (Queen Juliana and Prince Bernhard, living separately during many years after about 18 years of marriage)

The Sun/Moon midpoint requires an hour of birth. The position at Noon may be 7 degrees away from the real position of the Moon in a natal chart.
The Sun/Moon midpoint is the equavalent of (Sun + Moon)/2. Of course, to calculate this you need to use the degrees of the 360 degree circle. A Sun in the 10th degree of Taurus is at 40 degrees, a Moon in the 20th degree of Libra is in the 200th degree. The midpoint Sun/Moon of this example combination is at 120 degree (zero Leo).
Gepost door Astromarkt op 14:54