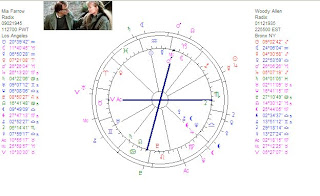 Mia Farrow married Frank Sinatra. I wrote about their marriage last week. About the artist in the chart of Mia Farrow and Woody Allen, see Art&Astrology.

She also had a long lasting relationship with Woody Allen. They even have a child together. But it seems that they never lived in the same house. They had a living apart together- relationship. Their relationship ended in fighting each other. When there is a very tight aspect between the Mars of two persons, that is often the way the relationship ends, see the examples below. Mia Farrow's Mars is exactly conjunct the Mars of Woody Allen. They fought over the fact that he married her foster child. The intensity of this legal fight is mirrored by Mars opposition Pluto in Woody Allen's chart exactly on the meridian of Mia Farrow.

When people become partners, they often share experiences or goals and that is demonstrated by sharing aspects. (See my site Astromarkt.net for more about this...)

They both have sense of style and art, they both want to earn a lot of money and they both are successful. Sharing this didn't make their partnership a great success, however. The Mars-Mars conjunction perhaps made a fresh and fast start in the beginning and/or sexual attraction started the affair. But the position of Neptune opposition Midheaven of the composite chart maybe says enough. Romance cannot be romance without drama. Even when their is a Sun conjunct Venus in the composite, too. 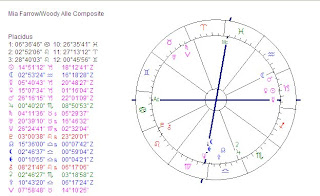