On Astropost: The chart and transsexuality

Now on Astropost: The chart and transsexuality, about the similarities in 5 charts of transsexuals (M-F or F-M).

This is the chart of Orson Welles. He married Rita Hayworth on a September 7 and that is why I looked at his chart. They were married for only 5 years. The 'transits' are the positions of the day of birth of Rita Hayworth. Let's see why they divorced.
MATCH
His Sun is in Taurus and hers in Libra, in a 157.5 degree minor aspect (see: do your birthdays match?) The signs didn't match, but they drew each others attention.
The moonsigns don't match
There is no match with Mercury, either
Venus is opposition Venus (opposites are attractive)
Mars is trine Mars (they cooperated and they were sexually attracted)
SHARING...
His Sun square Uranus and her Sun trine Uranus
That means that they shared an aspect between Sun and Uranus.
On Astromarkt I wrote about that:
Sun and Uranus shared in aspect might indicate: joined rebellion. How long this will last in a proper family home in a suburb, especially when the aspect is hard? But in a group of inventive people or in a place where news items are made you certainly can go for ‘sensation’ together. This relationship could have an unusual start. Too much tension could lead to stress, even if the surprises are nice. Both being independent and willing to be free it will be hard to stay together as a couple. With harmonious aspects this tendency for doing things the way you want it, will be tempered and then your unique qualities come to the light, better than if you were alone.
http://www.astromarkt.net/sharing-aspects-with-a-partner-child-enemy-or-business-partner.html
SYNASTRY
Her Jupiter square his Mars: they had a daughter together. Mars-Jupiter favors production and reproduction. 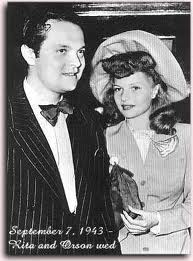 CONCLUSION
They didn't match and that is what she said, too. But they were attracted and got married and had a child. On the day that he married the progressed ascendant was inconjunct his Moon and transit Saturn on his Ascendant. Those were not exactly good signs to start with, even though the Moon is in his 7th house. As I said, he married more than once (Venus in Aries for love at first sight, Sagittarius on cusp 7 and Sun/Moon with Uranus for being motivated by change...). Here is the chart for the wedding day: