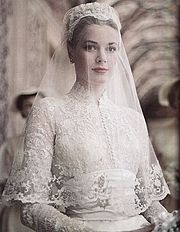 Grace Kelly became Princess Gracia of Monaco after her marriage with the Prince of Monaco.
The (civil) marriage date was April 18 1956. Here are chart, progressions and transits of that day.

We see:
- Transit Saturn conjunct Progressed Venus. You might read this as the old man joining the beauty, but it is also a sign of public confirmation of love. As in her natal chart Venus is sextile Saturn this transit/progression marks an important moment.
(- Progressed Ascendant conjunct Mars. Does this tell us about introducing the man into her life? Or was she born just a little bit earlier and P AC conjunct Mars was exact on the day of the birth of her first born?)
- In the progressed chart of Grace Kelly, the Moon was square Jupiter and that is a rather nice statement of the ‘stars’ for a moment of success and joy.
- Transit Venus was square the progressed Sun/Moon midpoint for having a nice day (focus on beauty, love and fun) and
- Transit Uranus square Venus for excitement.
- Transit Neptune conjunct Venus adds the romantic touch. Together Uranus and Neptune with Venus mean blinded by love.
- Transit Jupiter/Uranus midpoint conjunct her Midheaven for a positive change of position and a helicopter view over the future.
- Transit Uranus inconjunct Saturn mirrors the restrictions of protocol and demands. She later had to give up on her career.
It was apparently time for motherhood: progressed Sun opposition Ceres followed the wedding. Ceres is the symbol of motherhood and dynasties. See: http://www.astromarkt.net/ceres-in-astrology.html#pt
MATCH
Here you see her natal chart and the positions of the day of birth of Prince Rainier.

I like to point at the binovile between their Suns: it means that they rejoiced each other’s existence and it helped to overcome the not matching signs. No, their Suns and Moons didn’t match (their life styles and habits didn’t either). Her Jupiter trine his Ceres tells us that she was beneficial for the dynasty. The couple also shares aspects between Venus and Jupiter (he has the opposition, she has the sesquisquare. That means (see Astromarkt http://www.astromarkt.net/sharing-aspects.html#pt )
Venus-Jupiter: sharing the love of traveling together, reading and growing. Your marriage makes you feel better, you are the popular couple. Together you love to party, too.
They got along well enough together and there are no signs of risk of divorce in Grace Kelly’s chart. Her Venus sextile Saturn relates marriage to duty, stability, parenthood, obligations and duration. With such an aspect you’d rather not divorce or change the material benefits of marriage for less consistent pleasures. A sextile is the aspect of the easy way out. In that sense, Venus sextile Saturn might point at making it easy on yourself by staying married. It doesn’t sound romantic? See http://www.astromarkt.net/venus-in-aspect-with-saturn.html#pt
CHIRON IN 7th HOUSE
Maybe it is a shame, but I never have been that interested in Chiron, so I haven’t studied Chiron’s position much, sorry. Now I wonder what Chiron has to say in her seventh house, because transit Chiron is square this Chiron on her wedding day and because her Chiron was conjunct the Venus of Rainier. Chiron in the seventh house gets few ‘happy ever after-reviews’ on astrology sites. Chiron heals, they say, but Chiron is were the pain is. So perhaps she wasn’t that lucky in her ‘fairy tale marriage’ or perhaps Rainier healed her broken heart after some nasty relationships. (who knows for sure?). As Mercury is conjunct her Chiron, his Venus is also conjunct her Mercury. That is nice for talking to each other.
Grace Kelly was a talented and ambitious beauty and it was important for her to have a stable financial position. As the daughter of a rich man she couldn’t afford to marry a pauper. By marrying a prince she became the romantic idol for millions. Romance, that is Neptune...
Neptune is the most important planet in her chart. Neptune doesn't make aspects in sign or orb 5 degrees. Neptune is also rising before the sun in the natal chart and ruling the Moon in Pisces in the 5th house. Neptune has a lot of ways to be manifested in real life. Neptune turns up when words like belief, art, philantropy, movies, myths, photography, fantasy or media turn up. In a way she used almost the complete Neptunic vocabulary.
Gepost door Astromarkt op 04:18