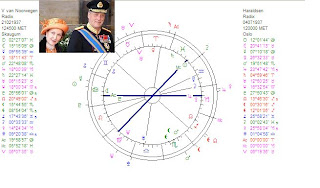 King Harald V and Queen Sonja share a romantic love story. It took them 9 years to convince the father of Harald that he had choosen the right woman to be the next Queen of Norway. He had fallen in love with her big brown eyes from the first moment that he saw her. That is the effect of Venus in Aries. He has Venus inconjunct Neptune, so for a king to be he has a rather disproportionate romantic nature. He fell in love and didn't want nobody else, even if he tried. Let us see if they match:)

Synastrie:
Her Mars is trine his Ascendant.

Read also:
The astrology and timing of meeting a partner (on my site Astromarkt)
Gepost door Astromarkt op 12:45