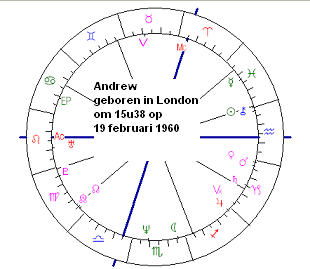 ANDREW AND SARAH, DID THE MATCH FAIL OR...WAS IT MENT TO BE?

In September 2007 I saw a documentary about prince Andrew. An astrologer, Penny Thomton, told the television maker that Sarah Ferguson and Prince Andrew had consulted her because they wanted to know if there was a match between their charts (if they matched...). Penny Thornton says that she did not know for sure, even though Sarah's positoins were connected to that of the royal family.

It made me think about the fact that it is often so, that people in love just do not want to hear what others say. I suppose Penny Thornton wanted to be nice to the lovers. Because any astrologer can see the tight aspect in the composite chart: Venus square Uranus. It is the aspect of marrying too soon and of falling in love instantly. Uranus is also the symbol of the astrologer. In this case: love in spite of the astrologer:( 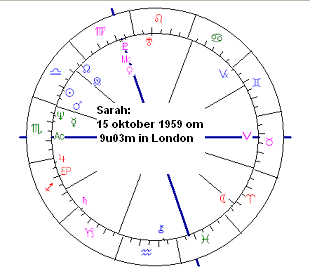 Andrew and Sarah share asepcts between Venus and Pluto, so money might be the issue and so is intense desire. They also share an affliction between Sun and Pluto. That sort of 'handicaps' them with a strong will. I guess this was/is an absolute strong love with all of the problems that belang to a relationship that is too intense.

But there is more....Look at Sun Pisces and Sun Libra with Moon Scorpio and Moon Aries. It is not an easy combination to live and share a family life together. She is full of passion and independant. He is far more secretive and intense and from time to time unreasonable. With his crucial Uranus on the Ascendant he is actually the 'batchelor', doing things his own special way, wanting to be free and independant. In September 2007 he was part of the party scene (look at Jupiter in the 5th house of pleasures!). Before he was a tough marine officer, 90% of the time away from home.

Ex-wife Sarah has a crucial Venus and Pluto on the MC. Her reputation involves money, pleasure and strong sympathies and antipathies. Uranus is on top of the chart, for rebellion and liberty. It was not modern that she promissed Andrew to 'obey him' when she married him and even that is controversial enough to be inspired by Uranus!

So, maybe, according to 'the rules', they did not fit and match. But...on the other hand this marriage was perfect to keep both of them in the position that they preferred. They wanted to be free and independant! And they wanted children (Jupiter for Andrew and Moon for Sarah in the 5th).

Back to where I started: sometimes people just don't want to know. You might try to prepare a couple with a not perfect match, but those who are in love don't seem to have ears. So eventually there is a relationship anyway. And it seems that in the chart of Sarah Fergusson a dramatic fairy tale marriage is written in capitals: Venus conjunct Pluto in Virgo on the MC, square Jupiter and sextile Neptune (the price - Pluto - you pay for a romantic marriage that you always had been dreaming of...). It is THAT aspect of the marriage that matches his chart. He has Venus semisextiel Jupiter and biquintlle Pluto for spending lots of money and for being the party tiger with all of those girls that fancy him. Venus-Jupiter-Pluto could be the combination of being loved and for progress in love. But clearly it did not mean that he would remain married.

I think they were a perfect match, after all...When a person has such indications in the chart, what can you do to stop him or her to marry the wrong person first? Maybe the wrong person is the link to a better way of living, later, that could not have been lived without the first experience. Who knows?