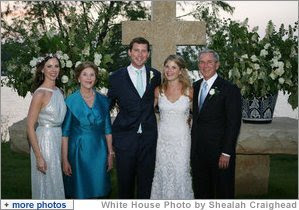 Jenna Bush's Midheaven is 7d05m Scorpio. Her fathers' Ascendant is 7d07m Leo. Often, parents and children have such a 'connection' in their birth charts. 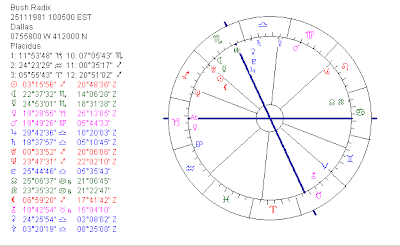 She got married 10th May 2008, with Henry Hager, on her fathers' ranch in Texas. Unlike Tricia Nixon, she wanted to marry without the presence of the media and not in the White House.

HAPPY DAY
There are a few signs for a party!
1. Progressed Venus is square her MC (perfecting the 21st, so her chart needs little correction)
2. On her weddig day transit Venus was trine Ascendant for looking very good!
3. Also the 10th of May was a transit Sun trine Venus and Mars day!.

She selected such a perfect moment that you would almost think that she choose the date with the help of an efemeris or astrologer. But yes, sometimes astrology works just like that, too:).
Gepost door Astromarkt op 12:38