Venus is the planet of love and entertainment. Uranus is the planet of controversy. So if you attract controversial lovers or if your love life is hot news, Uranus might be involved. Venus-Uranus is frequent in the chart of pop musicians, and some of them have a reputation with women (Rod Stewart, Mick Jagger, David Bowie – quindecile -). The world of entertainment is exciting…
Artist and 'freewheeling lovers' may have Venus-Uranus aspect or midpoint combinations or Venus and Uranus prominent in their Astro I.D. The aspects provides sense of rhyhm.
Uranus also urges to haste and speed. Uranus helps to fall in love easily (and sometimes blindfolded:). In love this aspect could cause marriages with the wrong person, too soon. With Venus-Uranus adventures in love are not unthinkable. In some cultures these adventures won't be experienced by the woman, but by her partner. The other woman is the Venus-Uranus woman. (But what if you are the other woman?:)

SUN-URANUS and VENUS-URANUS DIVORCES
Sun or Venus afflicted by Uranus in the natal chart of a woman often is one of the 'bad signs' for long lasting relationships.

Examples?
1.
Lisa Marie Presley (who gave birth to a twin recently married 4 times (and divorced 3 times). She has Sun in Aquarius and there is a sesquisquare with Uranus within 2 degrees of orb. She also had Venus in Capricorn square Saturn and that makes it easy to see the mistakes and the disadvantages of a marriage and a partner. She was born February 1, 1968 in Memphis.

2.
Elisabeth Taylor (who is very ill now and recently went to the UK to say farewell to her family members there) has Venus in Aries (good sign for love at first sight, bad sign for keeping the fire burning) conjunct Uranus (good for an artist and falling in love, producing however a flashlight-relationship), in the 5th equal house of games (and opposite sex). Her oriental Mars might indicate an orientation on males...She married 8 times, twice with the same man. Here is her chart... 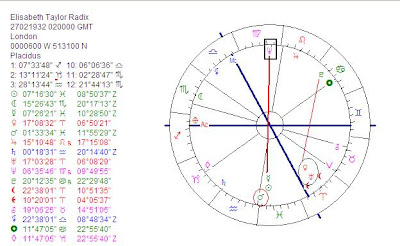 3.
Princess Caroline of Monaco married 3 times and had one divorce. The second husband died in an accident. She has Sun opposition Uranus in the 5th house, Jupiter (for multitude) in the 7th house of marriage and Mars sesquisquare Saturn. Sun-Mars and Mars-Saturn afflictions in the chart of a woman are, like Sun or Venus with Uranus indications for more than one (and if there are too many of these indications, no!) marriage. See her chart: 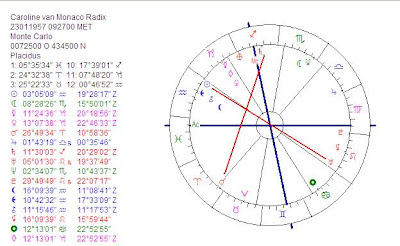 5. Dutch singer/entertainer Ria Valk (born February 11, 1941 in Eindhoven; started her carreer imitating Elvis Presley and is now a painter) has the Sun tightly square Uranus and she recently decided that it was better for her to remain alone. Her first husband died and her second marriage ended in divorce.

BTW you can have divorces withóut these aspects, too, but most of the time it will cause more upheavel with than without!

VENUS-URANUS TRANSIT, PROGESSION AND COMPOSITION CHARTS
A progressed aspect between Venus and Uranus might just be a butterfly passing by or a flashlight relationship. It can also be an unexpected new hobby or pleasure (Venus is not per se love!) that will not last for long. I had it when I went to a carnival weekend. Loved it! But haven’t done it again…

With Venus in Gemini connected to Uranus you might start dancing, all of the sudden. Venus-Uranus is for surprises and unexpected bruses in love. Never a dull moment with Venus-Uranus! But sometimes when marriages crash, there will be injuries. That is the other side of Venus-Uranus.


The marriage of Prince Andrew and Sarah Fergusson is a fine example of Venus-Uranus in the composite chart…
Gepost door Astromarkt op 13:02