Princess Diana's wedding day and the match with Charles

The late Princess of Wales was born on a July 1 and married in July. This July post is about the match between her and Charles and about their charts on their wedding day.

MATCH
It is almost amazing how little match there is between the charts of Diana and Charles of England. (On the left is the chart of Charles with the natal positions of Diana.)
Though their Suns and Moons are not in conflicting signs, there is also no harmony, like a trine would offer. There is no tight aspect between them. And Mars in Virgo is no match for Mars in Sagittarius, even if there is no tight square.  Venus in Taurus can live in peace with Venus in Libra, but they aren’t really a match. There is no major or minor aspect that links the planets. How could they have fallen in love? It was not because they ‘ matched’ and anyone could see that. If I were a match maker, would I want them to be a couple? No, not at first sight. It is no surprise that the charts don't show a couple at frst sight either.
So there must have been another attraction between them and there is. His Sun was exactly conjunct her midpoint AC/MC and that made him the center of her life and being. He was her destiny. And her Jupiter is on his Descendant. His uncle advided him to marry Diana. It didn’t make them happy together. But she gave him children. Jupiter is in his fifth house of children.
HIS CHART ON THE WEDDING DAY
He married her with transit Uranus on his progressed Venus, transit Neptune semi sextile the natal Sun and transit Chiron exactly opposition his natal Sun. Progressed Midheaven inconjunct natal Venus is completing the picture. It says: a marriage, but...(there is something wrong).

HER CHART ON THE WEDDING DAY
Diana recently had had Neptune on her Ascendant, making her insecure and shy. But she also had transit Jupiter trine Jupiter (happy period), the Sun sign changing (life style changing), the Ascendant square Jupiter and Saturn (ups and downs), Progressed Midheaven conjunct Mars (your status related to a man).
The life of Diana changed more than the life of Charles, who was used to the media, the ceremonies and the protocol. 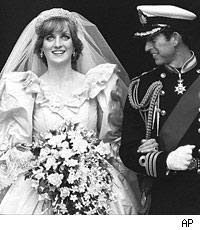