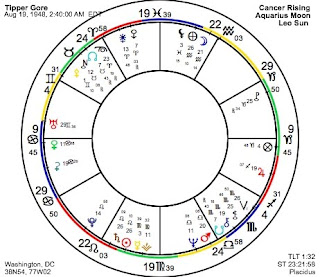 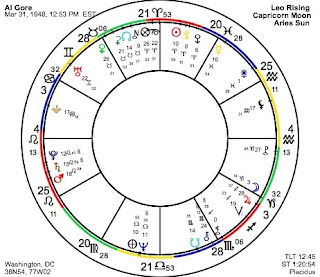 There are a couple of famous couples on this blog and this time (because of the Climate Conference in Kopenhagen and Climategate) the couple is Al and Tipper Gore. They were born in the same year, 1948. He is an Aries and she is a Leo and that is a match. There is a minor hard aspect between their Suns that explains the difficulties in the relationship between Al Gore and Bill Clinton who has the same birthday as Tipper Gore (but was born 2 years earlier). As long as she doesn’t want to be the star (and that must be difficult for a Leo) their Suns match. It looks very attractive (two shining stars), but one must be leading. I would like to see them dance a quick step!:)

MUTUAL LOVE
With her Venus square his Sun and his Venus square her Sun, the mutual love and sympathy must be obvious. They really love and like each other, even though it is sometimes difficult to agree on matters of taste and style (as her Venus is semi square his). Their Mars match (his in Leo, hers in Libra) and her Jupiter is trine his Mars! That refers to reproduction (and they have children together). It is also an indication that she will support his efforts and activities.

GOING STEADY
Al Gore doesn’t have indications for a divorce in the natal chart. With Venus in Taurus and Mars in Leo (both fixed signs) it is to be expected that he goes for longlasting love (he goes steady!)..
Tipper Gore's chart has a difficult opposition between the rulers of the first and seventh house (Moon and Saturn) and between the ruler of the seventh house and Venus on the Ascendant. Venus is semi square Saturn (ruler 8). So in her chart we see possibilities for breaking up. However:
They have been married for ages now, since May 19, 1970. That is 40 years. So here you have an example of a long lasting relationship.

SUN-NEPTUNE
They share a conflict between Sun and Neptune (he has the opposition and she has a semi square). On Astromarkt there is an article about sharing aspects. I write about Sun-Neptune:

Sun and Neptune shared in aspect gives you shared ideals, dreams and faith or even a shared idol! But with hard aspects you might share the same disillusions as well or this relationship is disillusive. Cooperating could work out best in an asylum or in a non-profit organization where they can help others, and each other.
Another possible combination is between enemies and with Sun in hard aspect with Neptune shared. Ideology stand between you as was the case with the murderer of director Theo van Gogh who shared Sun square Neptune with his victim.

I read that they go to church each Sunday (if possible). Neptune is the symbol of ideology and religion. Perhaps the issue of sharing the same ideals is a hot item for the relationship. Life is not always a dream, but you can at least try to realise yours...perhaps that is the general idea of Sun-Neptune here.

AND?
Is it a perfect match? Is or was it always a perfect marriage? Will it last till they die? I don’t know. But I do know that they love each other and that they have a strong sense of belonging together. Of course, that is why they ARE officially married and together still!:)
Gepost door Astromarkt op 13:26