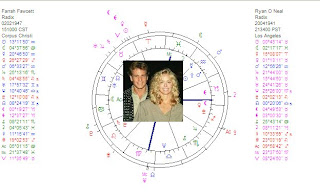 Ryan O'Neal used to be married with Farrah Fawcett. They divorced and there was a rumor that they would marry again just before she died. Mars-Saturn, the combination of death and divorce, is of major importance in their relationship. Both have an aspect between Mars and Saturn and his Mars and Saturn are in hard aspect with her Sun. In the composite chart Mars is sesquisquare Saturn. And in the final period of their relationship his progressed Sun was inconjunct her Mars and Saturn conjunction, reflecting a loss because of death.

SHARING MARS-SATURN
The Mars-Saturn combination is the aspect combination of restricted energy, death and divorce (in the charts of women). He has the square; she has the opposition in her chart. In the article on Astromarkt, about having the same kind of aspects as your partner, I write:

Mars-Saturn: working hard together as long as possible (like Queen Elisabeth and her late mother), sharing the same frustrations, not much fun (unless there are other indications). This aspect might indicate a lack of shared activities.

NATAL AND PROGRESSIONS
In her final hours the aspect of the issue of death (Mars-Saturn) brought them together again. This was reflected by the progression of his progressed Sun first inconjunct her natal Saturn and in the end inconjunct her natal Mars. That was the 4th Mars-Saturn combination that I noticed. (I already mentioned that his natal Mars and Saturn were in aspect with her Sun and that the composite chart has Mars 135 Saturn). The inconjunction has the potential meaning of 'lost', so that we can read this combination as a lost because of death.

SUN-PLUTO
Another shared aspect combination is Sun-Pluto (she has the opposition, he has the square). In their composite chart the Sun is sesquisquare Pluto. It means that their strong egos might cause problems. And that there was a strong and vivid but difficult bound between them. That explains how they got involved again when there was a shared health problem (how to survive cancer).

PERSONALITIES
Their natal charts tell us that they will have problems finding Mr. or Mrs. Right. Or should I say: that they need a little more experience until they settle down or realize that it is better to remain on their own. That is reflected by difficult distances between the Ascendant and the Descendant and by various aspects that I will name later in this post*). Farrah Fawcett's chart has such indications in the natal chart. But: with 60% of her positions in fixed signs she would likely hold on to relationships.

Ryan O'Neal's chart has minor aspects, not supposed to be difficult aspects or indications. But those aspects tell us that he is creative in dealing with separation of women, that he is a romantic seductive kind of guy and that he knows how to get related. With Moon sextile Venus women like him and Gemini (double bodied sign) on the Descendant tells us that there will likely be more than one marriage, even though 70% of his positions are in fixed signs and fixed signs mean: holding on...

MATCH?
- Their Suns didn't match much (Aquarius and Taurus) so they had a different lifestyle
- Their Moons matched (Cancer and Pisces) so they could be friend, their habits matched
- The position of Mercury speaks of good communications
- Venus does not match Venus (different tastes and preferences)
- Both had Mars in Aquarius, so they could cooperate in the same style

In some ways they did, in other ways they didn't match. I have noticed more divorces when the sun signs don't match. It seems to be important to have the same kind of nature or at least matching lifestyles, to have a long time marriage. Her Sun/Moon midpoint is square his Ascendant. You can read more about Sun/Moon midpoint in relationships by clicking the label below. On Art&Astrology you find the charts of Ryan O'Neal and Farrah Fawcett and their patterns of artistic talent. Find their charts by typing the name in the left upper space and click 'blog search'.

*) In the charts of females hard aspects between Sun and Mars, Sun or Venus with Uranus or Mars and Saturn are indicating the possibility of a divorce. In the charts of males the Moon or Venus afflicted by Neptune, Mars in hard aspect with Uranus or the Moon conjunct, square (included semi and sesqui square), inconjunct or opposition Saturn are reflecting the not lasting relationship.
Gepost door Astromarkt op 04:53