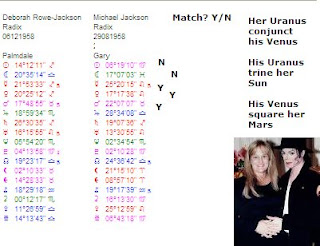 Debbie Rowe and Michael Jackson were married once and perhaps they have children together, who knows. Their strange relationship raises the question: did they match? And the answer is: not in the long term, but...there are indications for a shared passion. So perhaps she speaks the truth when she says that she and Michael Jackson were lovers. Look at the synastry, for example.

SYNASTRY
Michael's Venus is exactly square the Mars and Jupiter of Debbie. Her Mars-Jupiter opposition refers to having babies (multi productivity). So perhaps THAT is why he liked her in the first place?

His Uranus is trine her Sun. That is a sign of friendship (and a certain distance). Her Uranus is conjunct his Venus and that is an indication for a flash light relationship (and offers a possibility of an adventure or falling in love - perhaps one of them did).

MATCH?
Her Moon in Libra does not match with his in Pisces, but they can both like arts and music and perhaps that is what brought them together.
Their Suns don't match (Virgo and Sagittarius).
Their Mercury's and Venus match, so they understood each other and had fun together, sharing the same sympathies and tastes.
His Mars is conjunct hers (within 5 degrees) and that reflects cooperation and sexual activity or productivity.

CONCLUSION
There is no astrological reason why Deborah Rowe should not be the mother of his children. Apparently there was mutual sympathy and a shared passion. They also share an aspect between Venus and Uranus and that (again) shows that they were friends and had a short affaire perhaps.
Of course, there are no hours of birth available, but nevertheless it is obvious that it could have been luv, really! (Why would you marry a woman that you don't like anyway?)
Gepost door Astromarkt op 11:45