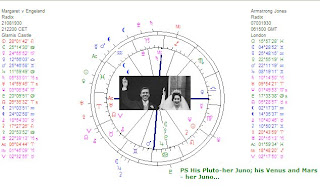 Anthony Armstrong Jones has Mars in mutual reception*)) with Uranus and they are the final dispositors of the Midheaven routing (Sagittarius, Jupiter in Gemini, Mercury in Aquarius, Uranus in Aries <> Mars in Aquarius). A hard connection between Mars and Uranus is one of the indications for divorce in a male's chart. He also has Moon square Neptune, another 'warning'. His marriage with Princess Margareth was his first marriage. So there could be serious problems...

Princess Margaret must have loved her husband dearly (Venus in Libra in the seventh house) and yes, he was good looking (Venus in the 7th house chooses at least a charming partner). She had Saturn on top for duties and status above all, however. While he had Saturn square Uranus...which means that he wanted to break free.

Margaret also had indications for divorde: Venus in the 7th house opposition Uranus in the first, for example.

MATCH
Both had indications for a divorce. For both persons it was their first marriage. That doesn't support the idea of an everlasting relationship. And: did they match? Certainly not, except for Mars (cooperation, sex). His Mars in Aquarius, hers in Gemini. But the rest...

SYNASTRY
And how about the synastry?

SHARED ASPECTS*) AND COMPOSITE
They share an aspect between Mercury and Mars (for discussions). But there is little more. In the composite chart the tightest aspect is Sun inconjunct Saturn, symbolising separation.

PROGRESSIONS
Armstrong Jones had Ceres on the Ascendant of his progressed chart in 1958. The Saturn of Margaret was exactly opposition his progressed Ceres-Ascendant. Reading: he met the mother of his children. She met the father of hers. As his Jupiter was conjunct her progressed Ascendant, he gained her trust in that year. And so, they got married, they were together for many years.

But in the year 1978 they divorced after separation in 1976. What indications were there?
Her progressed Sun was conjunct Venus in 1976 (but, we are aware that Venus is square Uranus in her natal chart, ruling the houses 1 and 7 and that this is an indication for a divorce).
In 1978 her progressed Sun was opposition Uranus.

Her husband's progressed Sun had changed sign in the years before 1976/1978. The Midheaven changed sign in 1975 and the first aspect was an inconjunction with Neptune (positioned on the Descendant of the natal chart; inconjunctions with Neptune refer to loosing something or an illusion) and later square Sun. His progressed Mars and Uranus (symbol of divorce in a male's chart) are on either side of Margaret's Ascendant in 1976. And there was probably much more, but I think this is enough.

Anthony Armstrong Jones and Princess Margaret just had to divorce one day...

For the chart of Armstrong Jones, the photographer, see Art&Astrology, label Photography..

PS Princess Margaret was a heavy smoker (see: Sun conjunct Neptune, Moon in Cancer with Ceres -genes and roots - rising before the Sun and Neptune inconjunct the Ascendant). For more about smoking and astrology, see Astropost: http://astropost.blogspot.com/search?q=smokers

EXPLANATION
*) What is sharing aspects? When in your chart two planets are connected and in your partner's chart they are also in aspect with each other. More about sharing aspects on Astromarkt...
*)) Mutual reception: when one planet is in the sign that 'belongs to' (is ruled by) the other planet.