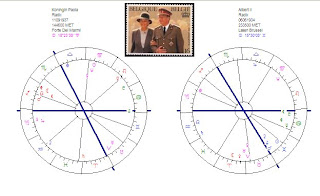 King Albert II and Queen Paola of Belgium married 40 years ago, in 1949. The marriage almost crashed because of Albert's affairs. Both have an aspect between Mars and Neptune in their natal chart. Sharing Mars-Neptune aspects does not make the couple happier (reed Astromarkt about sharing aspect...). But do they match?

He has the Sun in Gemini and she in Virgo: no match
His Moon in Aries matches with hers in Sagittarius
Mercury in Cancer is an speaking terms with Mercury in Virgo
Venus in Taurus collides with Venus in Leo, however
Mars in Gemini is opposition Mars in Sagittarius

PLUTO
So, generally, no, they don't match much. They can live together and they can talk together, but they are different. They have another life style, other tastes and sympathies and another temperament. So how come they got married? And why for such a long period? In my opinion, it must be because of Pluto. Pluto is a fanatic. Pluto is not easy. Pluto is jealous. And Pluto is strong. And I almost forgot: Pluto is also the symbol of power, money and politics or authority. Their position didn't make it easy to separate. And look how important Pluto is in this relationship:

. Her Pluto is conjunct his Descendant.
. When he married in 1959 Albert's Midheaven was inconjunct Pluto.
. And much to my surprise, his progressed Pluto was exactly conjunct her Progressed Descendant. Perhaps she was impressed and/or he was fascinated? 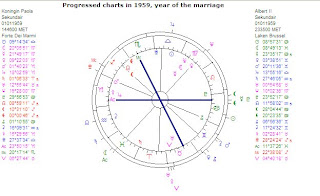 Both have Pluto in connection to 'relationships'. Hers is in the 7th house. His is conjunct Descendant. I often notice that Pluto has the effect of 'cannot live with and cannot live without...', difficulties but also with seeing each others values. Let us say that both have a challenging relationship in their chart! With Pluto's influence a marriage becomes a marriage that will be tried and tested.

VENUS-MOON
But..there are also Venus-Moon connections between them and that shows us that there is and was and will always be at least some feelings of sympathy and perhaps even...love.

More about Albert and the odd relationship with the daughter of him and his mistress...
Gepost door Astromarkt op 09:26