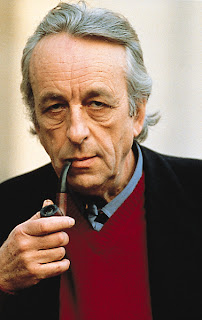 Louis Althusser and his wife Hélène, marxist intellectuals, had a difficult relationship that lasted until he killed her. What do the charts say about the relationship of this famous couple?

In short: they clicked, they didn't see each other clearly and it was a painful relationship with strong ties of a ideological couple with more than one shared experience or characteristic. It was a marriage strongly defined by the eventually destructive ailment of the husband.

MATCH: OK
How was the match? Surprisingly good. Look at the chart of Hélène with the transits of the day of birth of her husband and later killer:

- Sun conjunct Sun is for joined life style, joined ways of living and living together as one, tightly. They were a bit of the same kind.
In this case that was very difficult, because Althusser had problems accepting himself. So how could he accept his alter ego or the one in the mirror?

- Venus conjunct Venus should mirror joined sympathies and preferences, loving each other. The story says, however, that they argued about almost everything, like buying clothes. Maybe that WAS because they used to feel at ease with each other.

- Their Moon signs didn't match (Pisces and Aquarius), so they had different needs, habits and backgrounds. It wasn't easy to share the same house.

- It was easier to share the same bed, perhaps. Mars is sextile Mars and that is a match.

STRANGE SYNASTRY
Her midpoint Sun/Moon is square his Chiron. There is hurt and pain related to the marriage. He hurt her all the time and maybe  she hurt him, too. It seems to have been part of the deal. On http://www.edwardfox.f2s.com/althusser1.html they quote a friend saying that they were both the knife and the wound to each other.

His Neptune is quindecile her Ascendant and that is a rare and nasty coincidence that creates a confusing situation. His Sun is quintile Neptune, and that is creating confusion anyway.

Her Neptune and Uranus are square his Sun and in her natal chart the Sun is square Uranus and Neptune, too. Perhaps she wanted to be blind for what she saw (for example, when he flirted with others). Maybe they never really saw each other as they really were.

One of the most important aspects of the relationship is his Saturn conjunct her Ascendant. There also was a sort of tendency to control or limit Helene (Saturn-Ascendant) and she respected him. There was an age difference (she was older). In the end, he ended her life. Saturn-Ascendant relationships tend to last long, sometimes because the Saturn person doesn't let the Ascendant person go…

All in all they clicked (but they had different habits). She idolized him and he mesmerized her. And she was motivated and attracted by his pain and by him hurting her? (Chiron*) Also, it  was a relationship based on guilt or responsibility, with an age difference.

NO DIVORCE
Why didn't they file for divorce? I think that it is because of the fact that they both had not enough aspects related to divorce. His Moon opposition Saturn is only one of the 4 indications of divorce in a male's chart. Her Sun conjunct Mars is wide, but she has Sun square Uranus, tightly. They were more than adult when they met, so apparently they had a hard time finding a partner. When he started to have fans and followers, there was enough choice. Or am I cynical?

SHARED ASPECTS
When people share aspects, they share the same experiences or characteristics. For example, when you had a hard time in love (Venus-Saturn) and your partner, too, you are likely to stick together in order to avoid more pain.
You know that Venus - Saturn makes you stick like glue to marriage, because of obligations, the mortgage, parenthood or other feelings of responsibility or guilt.
Helen has a minor aspect between Venus and Saturn: 157.5 degrees (sesquisquare + half semi square).
Louis has the semi square.

They shared Venus-Saturn. Quoting myself (http://www.astromarkt.net/sharing-aspects.html ):
Venus-Saturn: staying together as long as possible because love is a serious thing. And if you break up (possible with conflicts and supported by more indications) the pain is long felt.
He was never true to her. He seduced women in front of her, just to hurt or punish her. But she didn't leave him. I think that Hélène's Moon inconjunct Venus shows an almost desperate need to be loved that eventually cost her her life (as Venus is ruler 8th house of life and death.
She had Sun square Uranus
He had Sun trine Uranus
It means that their relationship had an unusual start and that there was excitement and tension between them. It seems that she  was his first sex partner.
She has Sun square Neptune
He had Sun quintile Neptune

They were both idealist and possibly had a romantic idea about the world. They also were unclear abou tthemselves. Quoting myself again:
" Sun and Neptune shared in aspect gives you shared ideals, dreams and faith or even a shared idol! But with hard aspects you might share the same disillusions as well or this relationship is disillusive. Cooperating could work out best in an asylum or in a non-profit organization where they can help others, and each other."

This seems to be related to his mental situation and to the marxism.
Venus conjunct Mars and Venus sextile Mars: they were people with a passion.

**It is an interesting case of a matching couple with difficulties. In the eyes of their friends, they were not 'compatible' at all, however. She was not elegant, she was old fashioned and she was humiliated by him in public. Saturn made it very hard on her and still she didn't leave.
**

KILLING
A. The killer
When he killed her, there were difficult and easy transits and progressions at the same time. What would you think of these transits and progressions?
1. Transit Mars trine Saturn
On that specific day, it was time for an easy death end.
2. Transit Saturn square Pluto
Having a hard time facing consequences, fear of paying the price. Saturn rising before the Sun and Pluto conjunct Midheaven point at the importance of Saturn and Pluto.
3. Transit Pluto conjunct Sun
Stress!!!! As her Sun is conjunct his, it was shortly after her transit Pluto-Sun experience. They were both having difficult times.
4. Transit Jupiter conjunct Ascendant
This day was the start of 'getting better' (often a therapy or doctor is 'on the horizon' with Jupiter)
5. Transit Jupiter inconjunct Progressed IC
Improvement with a loss involved
6. Transit Saturn opposition Nessus in 7
A hard confrontation after death
7. Transit Nessus inconjunct progressed Sun
Facing anger from the past in an unbalanced way with a loss involved.
8. Progressed Sun sextile Progressed Uranus
Liberation, independence and change coming up.

B. The victim
Her transits and progressions on the final day:
1. Transit Uranus conjunct MC
A shock, something suddenly changes the status quo
2. Transit Neptune sextile Sun
Confused 'letting go'
3. Transit Chiron inconjunct Progressed Moon
A moment of hurt
4. Transit Chiron semi square Sun/Moon
Vulnerable frustrating moment in marriage (remember that his Chiron is square her Sun/Moon. This transit is resonating that).
5. Transit Mars inconjunct IC
Getting hurt with a loss involved
6. In the progressed chart Saturn was conjunct Midheaven
The end of a period or condition (she died)

NATAL CHART HELENE
- Her Mars rises before her Sun. They describe her as 'militant' and with a cracked voice (Sun square Uranus).

- In her natal chart the Descendant was conjunct Mars/Saturn. It refers to a death ends on the horizon. In the Second World War she was a member of the resistance.

- She also had Jupiter and Neptune in hard aspect with the angles, for hope, beliefs and following an ideology.

- Her Saturn was 'calling'!

The importance of Mars and Saturn and the midpoint Mars/Saturn-horizon shows that issues of limited energy, death ends and discipline were important in her life. It seems that she spoke of suicide more than once.

If you wish to see the picture of Hélène and her natal chart, go to Astrodienst:
http://www.astro.com/astro-databank/Althusser,_Hélène


NATAL CHART LOUIS
He was mentally ill and yet worshipped by his audience (Moon quatronovile Neptune and sesquisquare Jupiter).

He said that he did it without knowing it. I think that Sun quintile Neptune is the aspect of the creative double life and the creative fantasy, too. As you may see in the links, he explains that he had an identity crisis. On my site Astromarkt, in the article about Sun-Neptune, I mention the issue of identity crisis related to this aspect.
He said that it wasn't him, but it was him. Here is the chart with transits and progressions for the fatal day.

EXTERNAL LINKS ON THE CASE
http://www.academia.edu/524253/The_Man_Who_Didnt_Exist_the_Case_of_Louis_Althusser