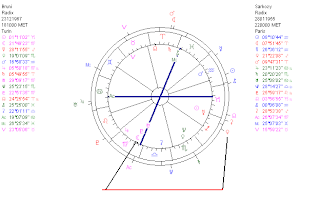 Carla Bruni and Nicolas Sarkozy are the sort of famous couple that knows how to draw attention. On Astropost I wrote about them when they had just fallen in love:

The French president Sarkozy (born 29 January 1955, 22h Paris) has fallen in love with Carla Bruni (23 December 1967, 18h10 Turin). Her Moon conjunct Pluto is square to his Venus. That is a strong loving feeling, yes! His Ascendant on her IC adds a sense of familiairity. But...their Suns, Moons and Venusses are in a difficult position towards each other, so it might not be easy to live together of to share each others tastes and preferences. Not as easy as it was to fall in love...

Carla Bruni is an artist (see Art&Astrology) with Neptune oriental, conjunct Venus. Sarkozy is an ambitious man with diplomatical talents (Venus crucial, Saturn oriental). It caught my eye that in the composite chart Neptune is in a crucial position, right on top of the IC. Should it be just coincidence that Neptune is on the solar return descendant of Sarkozy? And that Neptune is on the solar return ascendant for 2008 for Bruni? I wonder...And what about the fact that they were first spotted in Disney Land (a sort of a miraculous place, full of fairy tales, in line with Neptune?)...Sometimes it is a miracle how astrology works.

In an earlier post about Carla Bruni and her lovers I wrote about the relationship with Nicolas Sarkozy, briefly, ending with a few questions:

This relationship really has a good chance to survice, as it seems at first site. But what is that Uranus - symbol of controversy - on the Ascendant of the combine chart doing? And why is Neptune - for romance and the possibility of desillusion - on the IC of the combine chart? Time will tell...

Yes, time will tell if miracles and fairy tales exist in real life. Transit Uranus on Midheaven is often reflecting an alarming moment, a wake up call or upheaval. And it is almost time for Uranus to reach her Midheaven and start to surprise and/or make changes. So let us see HIS chart. Ay! Uranus is on his Descendant and Saturn is about to make an opposition with the progressed Sun. Uranus is angular in both cases and Uranus is angular in the combine chart, too, being resonated by the transits. Does it mean anything? Yes, it means that they are hot news today!:) And that it is up to them what happens next.
Gepost door Astromarkt op 06:29