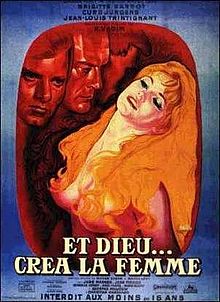 When I wrote about the charts of beautiful women I forgot to mention one of the most well known symbols of female attraction: Brigitte Bardot. Brigitte is a Libra with it’s ruler Venus in a wide sextile with Pluto and inconjunct Saturn. That is in line with the Venus-Saturn-Pluto combinations that I found in the charts of other beauties. It hurts to remain beautiful:).
Here is the chart of the ‘star’, born with an unaspected Sun. This ‘calling’  Sun symbolizes drawing attention (performance and show). The Sun makes a minor aspect with Neptune (22.5 degree half semi square). Sun-Neptune combinations (see Astromarkt) are not uncommon in the charts of actors, animal lovers and those with a ‘double identity’, like actors have. They are idols and not always who we think that they are.
ROGER
She married Roger Vadim, the man who brought her to fame, when she was only 18. They stayed together for 5 years and then divorced. That is interesting, because their sun signs were a match (5th degree Libra – 5th degree Aquarius)! So what is it that ended their relationship anyway?
1. Their moon signs didn’t match (Gemini and Pisces)
2. Neither did their Venus positions (Virgo and Sagittarius)
3. Her fiery Mars in Leo was no match for the controlled Mars in Capricorn of Vadim.
4. He may have idolized her (his Neptune semi square her Midheaven) and when it comes to reality, Neptune fades away...
5. His Pluto inconjunct her Ascendant might be a difficult aspect to handle.
Maybe this all was too complicated, even though there are a lot of aspects with her Ascendant. For example: his Juno was square her Ascendant (she might have been the perfect woman for him at first sight) and his Sedna (symbol of the daughter, young woman) was trine her Ascendant. He may have idolized her (his Neptune semi square her Midheaven). Perhaps that is why the movie that he directed was named 'And God created women'.
There were too many obstacles and there was not enough love (Venus) to compensate for that. Vadim married more than once. Moon square Saturn and Mars square Uranus are two of the indications for divorce in a man’s chart. Bardot has Mars opposition Saturn and a double bodied sign on the seventh house cusp to illustrate the risk of divorce or separation. She married three times. She is now still married with number three, a right conservative politician.
ACTING
What in her chart characterizes her as an actress? First let us see the circumstances and situation when she started. She was born rich and beautiful and had the chance to be seen in places where the rich and famous had their holidays. In those circumstances she drew attention (Sun is ‘calling’). She was orientated on the non-material side of life (ideals, faith or fantasy). The important Moon opposition Ascendant tells us about attraction and sense of what the people want and need. The prominence of Sun and Moon show the prominence of motivation. She is a star (Sun) and popular (Moon). The midpoint Sun/Moon = Node (that means that the community, family or groups motivate her).
The Moon is square Neptune (for sensitivity) and sesquisquare Jupiter (for the need for success)…Moon with Jupiter and Neptune helps you get fans and followers. The Moon is also semi square Pluto. Jupiter-Pluto combinations are indicative for success. Her popularity is evident. The Moon in Gemini (feeling young forever) appealed to the public.
It is clearly the picture of a popular star. The pattern of artistic professional talent is like this:
Venus and Neptune rising before the Libra Sun, a Libra MC and a Moon square Neptune. Midheaven completes the pattern (Venus half semi square Midheaven, Midheaven in aspect with Moon and Neptune).
Her professional activities where in the artistic field. She was (and is still) very photogenic.
LINK
http://astropost.blogspot.com/2010/09/charts-of-beautiful-women-and-venus.html
Gepost door Astromarkt op 09:36