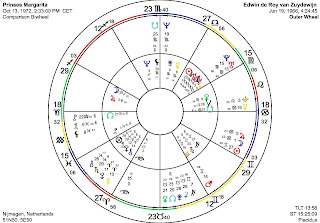 Dutch Princess Margarita, daughter of Irene, the sister of Queen Beatrix, divorced Edwin de Roy van Zuydewijn, so we are pretty certain about their non-compatibility☺ . I wondered about the reflection of divorce in their charts and I found an uneasy match. Also, they both have indications for possible divorce in the natal charts. Since it was the first marriage for both of them, there was a substantial chance for breaking up. During the marriage difficult transits and progressions contributed to the hard situation. More about that on Wikipedia (see link below).

Her Sun is in Libra is 112.5 degrees from his Sun in Gemini. Although their sun signs ‘ match’ , there is a difficult aspect (square+half semi-square) between their suns (=lifestyle). This aspect is attracting them, but also making it hard to find a joined way of living.

His Moon might be in Gemini, opposition hers. That makes it difficult to live together as their families or background don’t match (and they did not).

There is no conflict between her Venus and his. In fact there is a 108 degree aspect (quintile 72 + half quintile 36), that is reflecting a creative way to like and love each other.

Mars is 112.5 degrees from Mars. A conflict between Mars and Mars usually ends up in fighting and so it did this time.

Possible effect of the aspects:
With the Sun and Moon afflicted by Sun and Moon it is very hard to start and maintain a family life. Venus and Mars in aspect however make it easy to start a man-woman-relationship, ending in a fight...Also, his Venus is inconjunct her Sun, reflecting a lack of balance in love life. So you see that there was a reason to become a couple and one for ending the relationship. Also they both have indications for broken relationships in their natal charts and this was their first marriage.

SHARED
He has Sun square Saturn on Aries Point, she has Sun trine Saturn. They share a certain ambition and position and that is what also brought them together. More about couples sharing aspects on my site Astromarkt...With his Jupiter in aspect with her Sun/Moon midpoint they started with confidence...

DIVORCE
Her Sun conjunct Uranus is one of the aspect in the charts of women that point at a possible divorce and a double bodied sign . When a person has 2 or more of this kind of indicators it is pretty difficult to stay married or get married. Her former husband has 2 indications for divorce: Mars square Uranus and Venus opposition Neptune, even without knowing his hour of birth.

NOW
Princess Margarita found a new husband. She married and has a child and looks very happy. Recently she visited the Pope. It is been suggested in the press that she wanted to have her first marriage cancelled. That visit (accompanied by her brothers, sister and father) happened with Mercury opposition Vesta in her progressed chart. Natal Vesta is in Gemini, perhaps a perfect symbool of a second ‘ first’ marriage. Meanwhile her ex-husband says that he refuses to have his marriage cancelled.

Here above you see her chart and the birth positions of her ex husband in the outer wheel. Her chart is with hour of birth, his is for sunrise (time unknown).