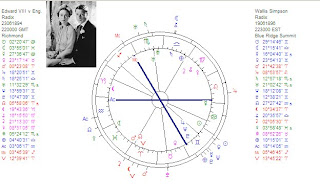 Edward VIII (the later Duke of Windsor) abdicated to be able to marry the twice divorced Wallis Simpson. That is true love, isn't it? Let us see their charts and let us see if they really matched. In the end maybe your conclusion will be the same: they rebelled together and they strongly felt that they belonged together. The mutual Sun/Moon midpoint aspects with Jupiter and Ascendant and the shared 'calling' and elevated Uranus ruler 1 are clear about that.

EDWARD
Edward VIII has the following Astro ID:
- Jupiter rises before the Sun (the international, traveling) ; he lived part of his life in France.
- Juno (symbol of marriage) is positioned on top of his chart
- Uranus doesn't make major aspects in sign or orb 5 degrees. This 'calling' Uranus is reflecting the upheaval and the important change in his life. As Uranus rules the first house and is placed in the equal 10th house, the change is likely to occur in the field of status, position and family ranking.

His abdication came right after progressed Pluto inconjunct Uranus. Pluto and Uranus together imply a dramatic change. The inconjunction adds ‘giving up on something, loss’ to this meaning. Transit Uranus was inconjunct natal Midheaven, showing the change (with a loss) while transit Neptune was inconjunct his Ascendant, showing the disproportionate sacrifice.

A romantic nature is attributed to the Moon in Pisces. But Edward VIII had Mars exactly on Aries Point. So he could be sharp, too. And perhaps Jupiter in the equal fifth house (same position as in the chart of Catherina the Great – who had so many lovers) shows us why there was concern about his ‘womazing’ before he met mrs. Simpson.

WALLIS
Wallis Simpson:
- Uranus is the elevated planet, ruler of the first house and in the 10th equal house (public upheaval, change in position) and Uranus doesn't make major aspects. Just like in the chart of her husband Edward, Uranus is 'calling'. Together they 'rebelled'...
- Neptune is rising before the Sun (a romantic dreamer in the first place) and in aspect with Sun/Moon and AC/MC. Romance motivates her and is the key motive in her life!
- Her Sun square Aries Point doesn't make aspects: she will draw attention at any possible level.
- Mercury is conjunct Neptune, perhaps she was misunderstood or she really was hiding some facts. In any case, she was in fact mistrusted. They thought that she was after the money of Edward and didn't really love him.

In the days of her later husband's abdication (December 10, 1936) her progressed Midheaven was inconjunct Pluto, illustrating the lost of power, influence and money and the disproportionate influence of politics on her developing position. They married June 3, 1937. But did they match?

THE MATCH
Their Suns didn't match (hers in Gemini, his in Cancer) but as they were not far apart (only 3.3 degrees) they joined lifestyle and lives.

Their Moons didn't match either (hers in Libra, his in Pisces), an understandable reflection of the difference in upbringing, family style and habits. The Moons are sesquisquare, symbol of the frustrations that it must have given them both.

Her Venus is semi sextile his. No match.

Her Mars is in Aries and so is his. But...they are a half semi square apart! It means that they were attracted to each other, and that they quarreled too.

SHARED ASPECTS
They share the same Ascendant in Aquarius and both had Uranus elevated and 'calling'. Were they just joining forces to withstand rules and regulations, I wonder. Where is the 'luv'? Why this sacrifice? And was it?

SACRIFICE, DESIRE OR FAITH?
Edward had Sun inconjunct Midheaven and Jupiter quindecile Midheaven. Jupiter and Sun connections are not uncommon for a member of the 'royalty', who is being protected and guided throughout life. But he also had duties, symbolized by Saturn semi square MC. The semi square reveals that the job's responsibilities may have frustrated him or we should belief in predicted faith and see it as an indication of stepping back later. The Moon in Pisces, square Midheaven, reflects the influence of romantic feelings on his career. Mars quintile Neptune (a creative way to give up on a job)? Read Astropost about the Queen Mum, whome he referred to as 'Queen' long before he abdicated...

SO...
They may not have been 'made for each other' but when they married they at least liked each other*)and they certainly felt that they belonged together.
The tigh trine between Sun and Saturn in their composite chart kept them together. This aspect draws attention. Wallis Simpson had Sun sesquisquare Saturn. Edward VIII had Sun in a 105-degree aspect with Saturn. They shared restrictions (they were never officially accepted) and perhaps that created the first unbreakable bond for mrs. Simpson...